On Tuesday, a bipartisan majority in the Kansas state Senate and House voted to override Governor Brownback's veto of a bill (SB 30) in order to raise tax revenue by $1.2 billion over the next two years. The measure is expected to shore up the anticipated budget shortfall of nearly $900 million through July 2019 and leave the treasury with cash to expand aid to public schools. What will this mean for Kansas individuals and business owners?

One of the most significant changes will be the revisions to corporate taxation. The new bill will eliminate the 2012 state income tax exemption for farmers, lawyers and owners of 330,000 businesses – a key feature of Brownback’s policy agenda. Corporate tax rates for all business entities (including previously exempt pass-through entities like LLCs, LLPs, S-Corps) will be 4% and subject to an additional surtax of 3% on corporate income above $50,000.

Personal tax rates will also be increased and a third individual tax bracket will be added. The prior two-bracket system (2.7% and 4.6%) will be replaced by a three-bracket system. The lower income tax bracket will be 3.1%, the middle bracket will be 5.25%, and the new upper bracket will be 5.7%. The tax rate will be retroactive to January 1, 2017. However, 2017 will serve as a bridge year with a lesser increase of tax rates (see summary below) and the full increase will go into effect in 2018. Taxpayers whose underpayment of estimated taxes results from the retroactive rate changes will not be subject to an underpayment penalty, so long as the underpayment is paid by the due date of the 2017 returns (typically April 15, 2018). 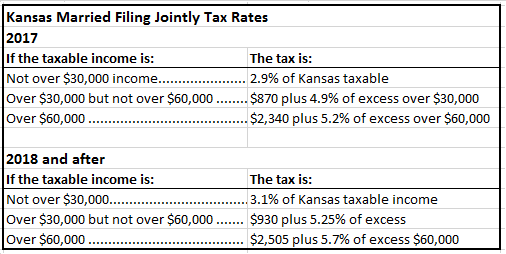 Kansas itemized deductions will remain at its current rates in 2017, but will be gradually increased according to the schedule below: